Literally meaning “Fifth Principle”. This technique is part of the base immobilizations (Osae Waza). Read more

Gokyo, base immobilization (Osae Waza) of the technical repertoire of Aikido with Ikkyo, Nikyo, Sankyo and Yonkyo.

Generally executed in Ure form, Tori locks Uke’s wrist by grabbing the inside of it and canceling its mobility thereby not allowing Uke to cut or prick with his weapon. Then taking the attacker to the ground in a pivotal motion on the outside, Tori holds Uke face down as in the controls from Ikkyo to Yonkyo.

Once on the ground for the final control, Uke is disarmed with a small hyperextension (without causing damage), followed by flexion of the elbow and wrist, with Uke being unable to keep the weapon in his hand. 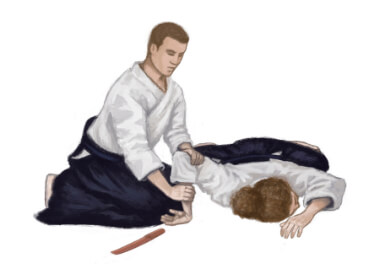